I was waiting for this movie for a while now. Deep down I probably wanted my beliefs about reaching greatness confirmed and also better understand what made him gave it all up right after he reached glory.

If there are some among you not knowing who Sergey is, our main character of this documentary movie, I could sum it up by saying he is one of the most talented ballet dancers of his time and the youngest ever principal at Royal Ballet London.

To make it all interesting, not long after he became principal he decided to quit Royal Ballet and amaze the entire world by doing so. The controversy news title remained a subject of discussion for weeks and Sergey got himself a new nickname: The Bad Boy of Ballet.

So, who is Sergey? You can guess by his name he was born in Ukraine and just later moved to London, in his early teens, when he was accepted to the Royal Ballet School. As a young boy, he started with gymnastics and then felt in love with ballet.

How did he reached greatness? I think I already had that answer. Yes, he is talented but he also worked very hard for it and when I say very hard I mean ballet was his only everything, he was breathing-eating ballet. You have to give it all to reach the top!

The movie touched a chord within me. I can definitely relate to the family huge efforts to keep him dancing and I can also relate to that moment when you lose your motivation to dance, only to rediscover it much stronger than ever. The story will unfold the harsh consequences keeping him into the best ballet schools had on the family, and leave you with a feeling that even if he might be still in a process of finding himself (aren’t we all ?) at least some of his and his family past wounds are healed.

I had the privilege to see him dance and participate to the interview after the movie premiere in London. I liked the person he arose to be, I liked he was just himself, not trying to be this false interesting character that the audience might like. His answers were genuine and utterly sincere and I can relate with all of these…I am the kind of person that will speak up even with the risk of losing some “friends” and being judged.

I am glad that he found a new meaning for him dancing, it would have been a shame not to see him dancing again, and I can’t wait for his next project!

I won’t reveal more of the history and let you discover it by watching the documentary. 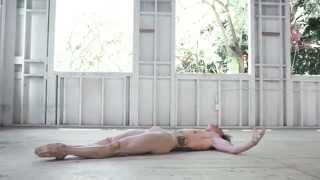